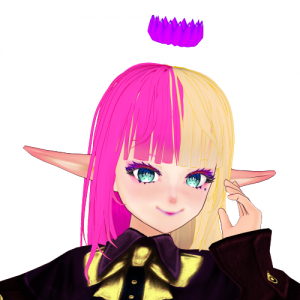 (She uses She/their/theirs pronouns) She likes to play with others for fun, usually in English or exclusively Dutch with other dutch friends. She is one of the Founders of Livebloom with their best friends and owns multiple (un)official Discord servers (Their own & LiveBloom Hub). She has been streaming since April 7th.

Born on the 23rd of December, Flare has already been an outstander. She grew long strange hair... half pink, half blonde even though her parents only had blonde and brown hair. Growing up in the Elf town has been difficult because she was always excluded from games with other children, Flare just became friends with the berry bushes and to cure boredom carved a crystal crown which she let float above her head with basic self-thought magic. So when she turned old enough to live by herself she moved to a human/elf mixed larger city with internet and social media. Luckily the city was used to immigrants from elf towns, so she was easily introduced to the internet and all modern items like fridges and telephones.

As soon as she got settled and met some friends, she decided to try out creating a social media page... it didn't work out that well... But she never gave up, she actually started live streaming for fun with her friends. After a while streaming, haters came through... Flare didn't know what to do and decided to quit.

After a year of self-discovery and acceptance, she set up a new personality to protect herself from people finding her... What a cruel world... A new person has been born... Bonbon, but with a more confident flare behind them after excepting themselves...