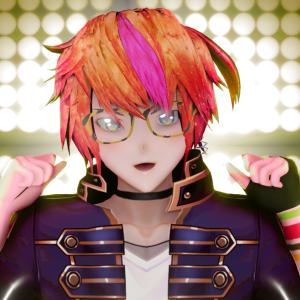 To sum up, we can call it a reality glitch. A dude who traveled across of a lot of anime and videogame world's like Digimon, Yugioh, Metal Gear and more... Breaking a lot of worlds, stealing information and technology for his own propose. After all, he was stopped by the maximum authority of the universe (Homeostasis) and finally he was transformed into an Astral Entity with the purpose of not bother the existence.

Millennia later he can stablish contact whit a Stone called Juan "The Elegant" an entity who is owner of almost all the Earth Business. His most popular brands are "Stone Corp" a secret mother brand who at the same time is "Pepito Studios" owner. a Brand directed by a Guinea pig called "Jeferson Fransico Guitierritos de la Corte de la Alfalfa Tercero" more known as Pepito. Pepito Studios is a brand in charge of producing +18 content and superhero movies. Juan, seeing Mokka desperate to return to his normal life, gave him a job at Pepito Studios as Vtuber. Inviting Pepito the boss of Mokka. Therefore, opening the Vtubing subdivision in Pepito Studios. Pepito gives all the implements to Mokka to be Vtuber, for this, Mokka acquired a debt with Pepito that he will never be able to pay; That's why Mokka is thinking of becoming a content creator +18 to pay off his debt