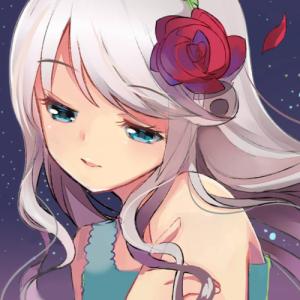 Arya is a stellar VTuber and VSinger who is mostly known for her covers of NieR songs. While originally only producing music on Youtube she slowly started to expand her content to Twitch and finally appeared as a Vtuber at the end of 2020. The main focus of her streams are games such as Genshin Impact or Dead by Daylight. However, evenings centered around chatting, karaoke or even ASMR are not out of the ordinary either.

Most streams feature a relaxing, casual atmosphere that is broken by chaotic energy - mostly caused by Aryas absolute lack of observational skills and perfectly timed redeems by the community. These moments are a strong contrast to the mostly elegant style that is present both Aryas music and design.

As a stellar entity floating through space for an extremely long time, Arya one day sensed a faint melody. Following what would turn out to be the first tune she ever heard, she arrived at earth. Desperate to learn more about those strange inhabitants and especially their so called "music", she disguised herself as a human being and singer.