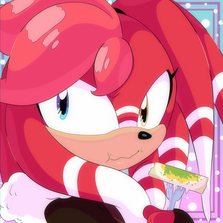 They said somewhere in the dense rainforest lives a great village lost to time. Nobody is sure what happened to them. But some did live to tell the tale, this is their story… The sun shined down, warming onto a statement as the inhabitants went about their days. They were all so carefree talking amongst themselves, doing their daily tasks, or enjoying the warm sunny day. They are thrown off balance in surprise as the ground starts rumbling. Soon the sky is overcast with a dark shadow engulfing everyone & everything, looking up, Zenimaa sees water begin to rush in from different sides of the village.

Zenimaa begins to run trying to reach higher ground, however, in her panic she notices a Chao looking distraught as if it’s lost its way. Zenimaa runs over without giving it a second thought, picking up the Chao as a wave was about to crash into them. She closes her eyes & shields the Chao with her body expecting impact but to her surprise, nothing happens. She opens her eyes to find herself… alive? She looks around in a place she doesn’t seem to recognize. She hears a sniffle as she looks down to see the Chao in her arms hugging her. She calms down the frightened creature as she gets up looking around. Where were the shrines, the waves, the dark sky? She notices odd structures in the distances & figured there must be answers there. As she made her way to them the more strange things she started to see. Strange creatures & people she saw before. Thoughts began to swell in Zenimaa’s head in a panic, “Where am I? Is this the afterlife? Am I really dead?” She thought to herself.

Looking down at the Chao thinking “I gotta be strong for him at least.” before looking back up & starts to walk around looking for anyone who may help her in this new area. After a few moments, they come across a dark entity & hide behind a shrub-like bush hiding & silencing the chaos cries in fear that it may see them trying to watch if this figure is a friend or foe. The shadow jerks ever so quickly at a quick pace, sensing its surroundings as if it knows something is nearby. A loud noise could be heard from afar & the shadow darts over toward that direction heading away from Zeni & her Chao friend.

“What was that all about?” not getting a good look at the shadow figure, Zenimaa looks as confused as she first entered this new land. Looking to her right she notices an abundance of loud noises leading into the hustle & bustle of the city life not half a mile away. Walking along with her Chao they first reach the new area unsure of how to ask for help in this new land, the stares from many look on at the echidna wearing the strange tribal clothes. Any chance the confused echidna had to speak to an oncoming stranger, they would take off before a question could be uttered.

“WATCH OUT!” came a voice from behind the lost Echidna.

Looking behind her a strange red panda was falling from the sky about to crash land into the now frightened Echidna. With a loud crash, the small red panda had fallen into the trash bin rolling in circles across the pavement just missing the Echidna who had dodged holding the small Chao like a squirrel holding their prized acorn.

“Darn it! I still can’t get used to this… sorry about falling in like that.” said the sheepish but bruised-up red panda who was starting to smell every fouler in the garbage.

Looking up at her almost crashed flight victim, the red panda made a quick gasp at what she was seeing. “Oh my goodness, you're an Echidna! I really thought there were no more of you left from what I read.” “No more of us left?” said Zeni with even more confusion.

“Oh sorry, I have only read in books that most of the Echidna race were wiped out many years ago by a disaster, maybe history was wrong. It’s really great to meet you. Do you live nearby?” said the red panda excitedly.

The Echidna looked up at the sky looking at the tall structures of buildings & to the many others on the sidewalk along with the hustle & bustle of city life. Still confused, Zeni only had one thing to say, “Where… am I?”

Unknown to the puzzled Echidna as to where she was, the strange & silly red panda soon took her to her friends to help her understand her situation even more. It turned out that Zeni & her small Chao had come from many years in the past when chaos had whipped out her entire tribe. With the help of her new friends, she was able to find that there really was no going back to where she had come from. It was as if fate had intervened from a terrible fate into giving the small Echidna a new start in life. It took a little bit of time but Zeni was not one to sit still in fear or confusion, she started to begin a new life in this new time & era along with the help of her new friends & her close companion Pompom who had become more like her own familiar over the years. From that point on Zenimaa would begin their own adventure, & wherever that led it was on their terms.