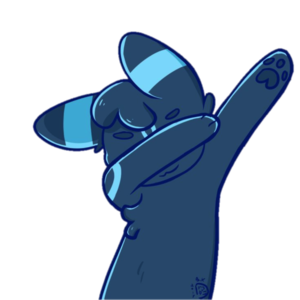 Yumbreon is a non-binary VTuber who streams in English. Their primary content creation is through streaming on Twitch, although they also have a YouTube and TikTok. Their streams mostly comprise of gameplay while interacting with their chat, although in multiplayer games they are known to take breaks from the game between matches to focus on chatting.

Yumbreon was once a simple Umbreon living in the care of a retired Pokemon trainer. They have brief memories of life in a nursery before their adoption. Yumbreon was never used in battle, their life being more like that of a pet's, and the affection they received from their trainer in this manner was what lead to their evolution one evening.

One night, while out chasing Hoothoot in the wild, Yumbreon came across a mysterious Pokemon that they did not recognise at the time, but they have more recently been able to identify as Hoopa. Hoopa, a Pokemon filled with mischeif, led Yumbreon through a dense woods and to a cave under the pretense of play, but soon had them trapped in a cave with no exit - simply a strange portal. Desperate to escape, Yumbreon ran through this portal only to find themself in a new demi-human body, in a world much unlike their own.

As Yumbreon spent time in this new world, they learned many things about it and themself. Upon discovering the Internet, Yumbreon decided to try and research ways that they might be able to return to their trainer in the world of Pokemon. In the midst of this, Yumbreon found out about the existence of VTubers, who have a wide variety of backgrounds and stories, and many of whom appear to also be from other worlds. Yumbreon began streaming in the hopes that they may find friends who will be able to help them in their quest to return home.