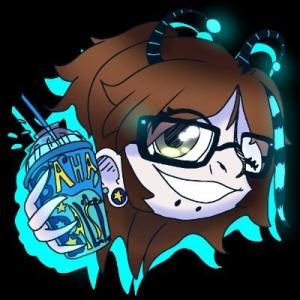 Yuki Koyuki is a Baja Blast obsessed, nonbinary virtual youtuber and aspiring webcomic artist. They use she and they pronouns. In addition to streaming, they also make fursuits and travel anime conventions in the southwestern United States selling merchandise in artist alleys. Their streams are a mixture of art and variety gaming, with their preferred games being from Nintendo, roleplaying games, and the occasional shooter. They have plans to release shorts, animations, and long form video content soon. They also run a members only art club that hosts their r18 content.

Yuki Koyuki is an alien fungus from outer space that requires living hosts (and Baja Blast!) to survive. She calls herself a "kawaiidyceps". She crash landed on Earth several years ago and took over the body of a tibetan sand fox before being taken in by "these security containment people". She escaped containment and eventually debuted as a VTuber as a way to share her authentic self with the world. Yuki has a passion for bringing joy, and is very grateful to Earth for being such a good home to her, because life in the galaxy is hard for a kawaiidyceps. (Alien life tends to fear bodysnatchers.) She loves cartoons, emo and scenecore fashion, furries (particularly sparkledogs!), and creating stories and OCs. She calls her stream mascot, Blue Puppy, her son. Before she was a VTuber, she was a furry nsfw artist.