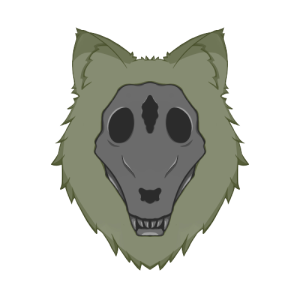 Wolf Anubite is a English Vtuber, a Deathly Devourer, who's content is primarily twitch streams. She is a variety streamer that mostly plays RPG Games, enjoying the story aspect of games the most. They also host her own Podcast/show on YouTube called Smol Talk, that is "just chatting" and Vtuber based, topics include: intro for the guest, anime, manga, games and Vtuber related topics.

Mostly appearing as a ghostly green wolf with a black skeleton Wolf Anubite is a mythical creature who was created by the God of Death Anubis, and is categorized as a Deathly Devourer due to her ability to devour most beings, her Death like appearance, and connection to the God of Death, but prefers a different existence than most of her kin. It's not clear whether she was created with the intent to be different from other devouring beings, but, what is clear is that she has no intention to devour the world and its inhabitants, instead she enjoys the company of many different beings and is very selective about whom she eats.

The time of her creation is unknown, however, she is said to have awoken around the end of the 90's. After which she lived among humans and other entities, learning and growing accustomed to the modern-day way of life.

Nevertheless some aspects of normal life she is not accustomed to, like daylight. She can survive in daylight but dislikes being in any sort of bright light, preferring to stay in dim light or darkness.

Her dislike for light is one of the reasons people mistake her for a vampire in her humanoid form, along with fang-like canines and a taste for blood, but she is not vampiric. She is known to enjoy garlic and has said she picked up blood drinking from a vampire after being told: "blood tastes good, plus it's another way to extract someone's life energy".

About 20 or more years later she came across a platform on the internet called twitch, after which she took an interest in the profession of streaming and ended up finding a fulfilling purpose to entertain beings with assorted gaming content.