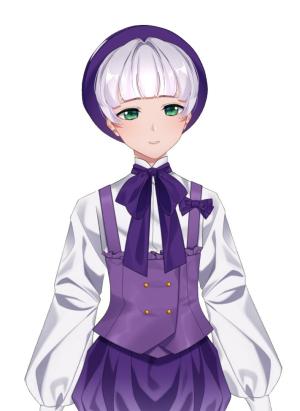 Vio is a ENVtuber that streams a variety of video games on twitch! She tries to maintain a comfy stream, even if she plays League of Legends. A purple mushroom fairy that states that she can't poison you that loves video games, animals and loves to tell people random, and disturbing facts at all times.

One day a purple mushroom fairy was incredibly bored of the peaceful life in the fairy realm, so she decided to check out the human realm. Once there, she fell in love with the food, the architecture, rarity of magic, and most importantly of all, video games. She happened upon a PC cafe and was very curious and that was the first time that she had experienced computers, technology and video games in general. Once Vio had touched upon the joys of the human realm, she was determined to stay there and thus has set herself among the humans.

She has made lots of friends here that are also other creatures that don't initially live in the human realm, but they have one common interest which is the technology and video games that humans have created. It has almost become an obsession with her! She can freely pass between the realms, however she clearly prefers the humans over the fairies and wishes to meld into their lives much more.