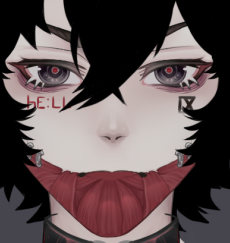 1-800-D34DB0Y is a male Virtual Streamer who makes content in English. He is a slasher who has a killer craving for gore. He has been streaming since 2021 and is associated with horror related content and artwork. He has no real debut and started from the shadows of the vtubing scene. Currently much about him is a mystery. His birthday is June 10 and is currently 70 cm (5'7"). His zodiac is Gemini

The Dead Caller, or Dial-Tone Slasher, is a late night radio host and streamer, that spends his time enthralling about true crime, horror and all things bloody. However, when the darkest hours of the night creep in, he dons the mask and moniker of the Dead Caller, a notorious slasher terrorizing the scene, turning his gruesome displays into works of art. Jason turned to a life of bloodshed and murder, becoming a nightstalker killer that harasses his victims through phone calls and following their every move. Under the moniker of the Dead Caller, he records his killings in his own radio studio, broadcasting on a "red room" style radio show called Dead Air that plays late into the night. He'd call victims live on air, often playing trivia games or describing what they were doing or wearing. It is unknown where the broadcasts come from or who the Dead Caller actually is.