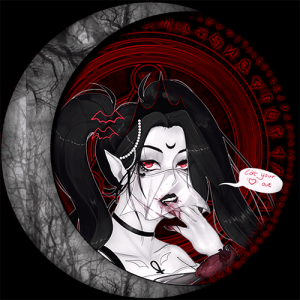 Vampy is a female Virtual Streamer and Tik Tok influencer who makes content in English. She is very well known for her Evil giggles. When she gives you love, her catchphrase is hugs to death! Vampy is the sweatiest but she is known for yandere play style (especially in Dead By Daylight). Her height is 5'7, her Birthday is in August, and her sign is Leo. Also she does not SAY BLEH BLEH BLEH.

In the early years of 683 BC (DCLXXXIII), an orphan girl, as young as the age of 10, lost her family in the ongoing war ignited by the Roman Empire that left her village in ruins, burned to ash. Fearing for her life and safety, she sought refuge in the tangled, twisted depths of the forests of what is now called Romania. She made a living for herself, turning to her instincts of survival as she weathered through hardships. On the girl's 21st birthday, however, her life changed once more, for the better. A spell book, worn with age and bound in sheepskin leather, tattered and pages crisp and brittle, was strewn among the brambles in the middle of the wood. Lit up by the sunlight, as if fate itself had other plans for her, leading her to such a strange and mysterious tome, the girl cautiously approached the ancient text. Its cover was strange and other worldly, languages she did not recognized. Empowered by magic that came from beyond the stars, she had invoked an old soul, something not from her own world as it possessed her being. Believing to have been within the presence of the fallen angel, she was harboring the being from Kepler, a planet the size of Jupiter with a heart of darkness that is so black, light cannot penetrate its atmosphere. She had now awaken anew in rebirth with a vampiric soul, shattered from grace and turned into a powerful Mother of the Night.