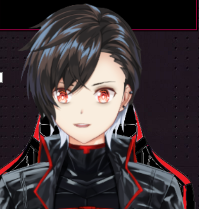 V is an English speaker, and mostly streams on Twitch. However, he also has a YouTube channel where he shows VODs and edited versions of his work. He has also begun to do VTuber interviews and game reviews in the form of a talk show. He plays FPS, RPG, puzzle games, some voice acting, and even makes his own memes and short stories. V's time zone is Pacific Standard Time (PST), and he streams almost every week at 5 pm on YouTube and almost everyday on Twitch. His birthday is 7/12/2077.

V's lore is actually a mystery. Some suspect that he is a cyborg, others that he's the digital ghost of a long-forgotten newscaster or streamer from Night City. There's even a theory that he's a living virus, come to infect the world with his influence. The only thing that we do know is that V came from Night City and he started streaming as a past time!