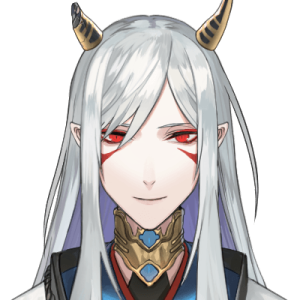 Umiyashono Kami was a member of NIJISANJI SEEDs' first generation. He debuted on 3 June 2018 and is a former demon god. He is 1000 years old. His birthday is on 4 June, however, he doesn't remember his actual birthday. His height is 14 apples. He is a Gemini. He has the ability to imitate voices. He has the same illustrator as Yamiyono Moruru, who is also retired. His fan name is called Worshippers.

On 3 April 2019, he announced his retirement on Nijisanji on Twitter. 6 days later he would hold his final stream. Since then, all of his previous streams, including his graduation stream, have been private.

A former demon god enshrined in a certain shrine. It has a mysterious atmosphere. He was a demon in his lifetime, but he was enshrined because he was doing too good things in his lifetime. It is a daily routine to see the votive tablets hung on the shrine one by one.