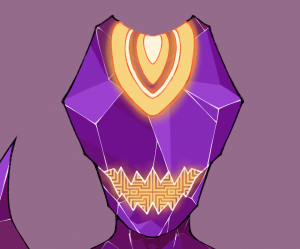 Tether_Online is a digital slasher who loves you jump into any kind of horror game he can get his digital hands on as well as other games. He's aggressive but not in a bad way. Tether_Online streams mostly on Twitch with whatever game he thinks would be interesting to play and even watch.

Allot of Tether's past is still missing in his memory but this is what he remembers so far.

Tether_Online, or just Tether, was a real person at one point but after being digitalized something happened and turned into Tether, the digital slasher. The last thing Tether fully remembers is being thrown into a new area and after a week he discovered he was on The User's computer and was unable to use his abilities or skill to do much of anything now, so now he streams for the hell of it since The User already has stuff for him to work with.