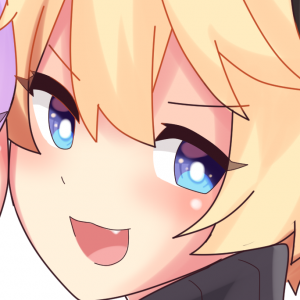 Tatsu Mori is a Virtual YouTuber who is a playful and fun loving dragon with a knack for video games. They love chocolate and have an obsession with their golden crown. Tatsu primarily streams from the FPS genre and dabbles in variety.

Tatsu was born into a royal dragon family. During his early years he spent his time understanding the ins and outs of what it meant to be a king. However, as Tatsu aged he was rather against this idea of royalty and did not want any part of being a king. Because of this Tatsu was banished. Before he left however, Tatsu's mother gave him his crown. A parting gift from a mother that still loved him.

During Tatsu's travels he became increasingly more attached to his crown, as the home sickness and separation from his mother became too great, violently lashing out at anyone who came too close to touch. What calmed Tatsu however, were chocolates. While his obsession with the crown was intense, his love for chocolates matched. The delicate and sweet taste of chocolate soothed him, reminding him of his mother.

Tatsu is a playful and loving little dragon. Normally finding his way into the hearts of those looking for a friend and someone to depend on. His loyalty to others and his view on the world give Tatsu his character, someone who wants to bring out the best in others and bring happiness into a world that banished him.