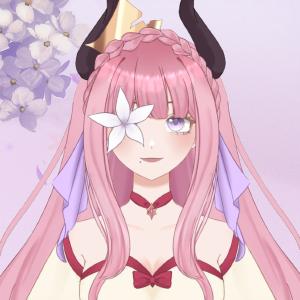 Sungahime is a Virtual Streamer who primarily streams games on Twitch. She started streaming on her Twitch on February 2, 2021, but held her official debut on August 15, 2021. Her main roster of games currently consists of Dungeon Fighter Online, Arknights, and Final Fantasy XIV. She has been an official content creator for Dungeon Fighter Online since March 2021.

In a realm far removed from that of the humans, there exists a mysterious god who appeared as a giant flower; they dreamed and gave life to a race of people. The people gave their god the name "Her Inflorescence". After realizing that Her Inflorescence would also take their lives away, they pursued immortality and thus exiled their own god. Their distance from Her Inflorescence eventually turned them all into demons with white horns.

One day, Sunga was born with black horns, and many of her kind found this to be an omen of the return of Her Inflorescence. After some conflict where Sunga lost one of her eyes, a part of Her Inflorescence bloomed in its place. She was ultimately exiled from her kingdom. When Sunga arrived in the human realm, she was not able to fit in amongst the humans until she met a mysterious woman, whom she refers to as the Maiden.

In exchange for learning how to live with humans, Sunga made a promise to the Maiden, and the Maiden then instructed her descendants to help Sunga keep her promise until it is time for her to leave the human realm.