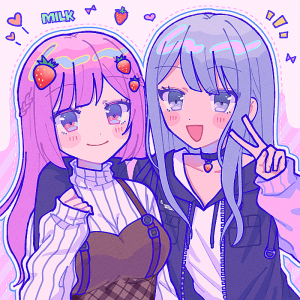 Strawberrywithmilk is duo Virtual YouTuber and VStreamer that make content in both English and Spanish. The duo consists of Ruby Berry who is a female that uses she/her pronouns and Obsidian Potassium who is a male who uses they/he pronouns. They started streaming on Twitch in October 2020 with 3D models. They later made their Live2D debut on June 18, 2021. Streams consist of gaming and chatting.

Ruby was forging in the forest one day when she came across Obsidian! He lived in the forest where he was raised by monkeys. Ruby invited Obsidian back to her farm where Obsidian discovered technology and fell in love with streaming and video games!!