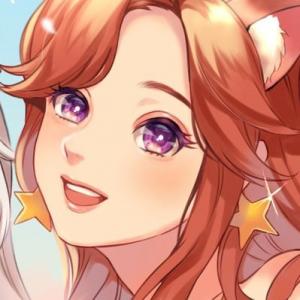 Starlitneko is a neko star witch vtuber/vtstreamer who streams art and games in English.

Liv is one of many species of Witch. In her case, being a star witch she derives most of her powers from the darkness of space and the stars around her. Being said, she is weaker during the day when the sun is out. She was born from a dying star, just like her brother and sister star witches. She has no mother or father, but, rather elders who were born like them to teach them their ways of being a star witch. Unconventionally, Liv set out to Earth to find other species of witch and form her own coven. Specializing in transfiguration, she decided to take on a human appearance to help her blend in with the mortals of earth. Her star witch form took on the appearance of a feline, which mostly derives from her feline familiar, Nova. Named after the death of a star from which she was born ("Supernova"). Nova also has taken on an alternate form to blend in with her mother. (She often refers to Liv as her mother).