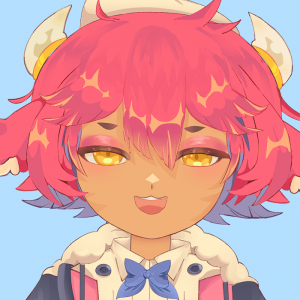 Spineys is a female Virtual Streamer and Youtuber who makes content in English. Her content focuses on a variety of art and CO-OP video games whilst often referencing pop culture.

Spiney was your average cow residing in the snowy mountains of Sweden. That was until her father left an old machine on her desk. Picking up her soda she decided to explore. Her legs getting tangled in all the messily placed cables attached to the strange machine, Spiney clumsily tripped with the soda can in her hand. In the chaos, she accidentally pressed a button that made it beep. The screen flared brightly with light. Spiney screamed. When she opened her eyes she found a new dimension. A world they call The Internet.

Hastily, Spiney grew to become attached to the machine and moved to a small shed where she continued to explore all the wonders of the new world she discovered. Making new friends, drinking her soda and learning more about her discovery she made many years ago.