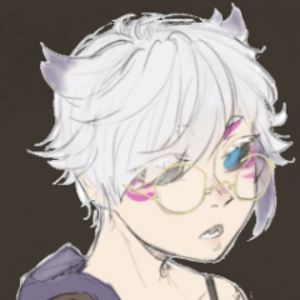 Id, going by the alias SP00KWHISPERS, is a variety vTuber found almost exclusively on Twitch. They're non-binary but don't mind what they're referred to as and insists everybody use the pronouns they're most comfortable with referring to them with. They have completely embraced their own scuff and instability, living as a sentient shitpost in most respects while on a quest to try to laugh in the face of all the world's darkness.

SP00K_E is a homunculus, an artificial being created by alchemists of eld in their researches into the genesis of life. They are incubrated from the heartsblood of a noble, slumbering owl egg, and mankind's seed of civilization; all placed within the Flask of Origination. Appropriately magnetized and kept at constant temperature in a cradle of fertile earth, the source of life will stir on its own and take on the semblance of human being. Artificially nourished with the blood of a dire ursid, it will grow unto the likeness of a human child and can be instructed and nurtured like any other into adulthood.

They were called originally by the name 'Idus', and with the countenance of their material source being an owlbear, mankind oft shunned them and called them 'spooky', 'quaint', 'odd', 'abomination'. To spite such treatment they took the unnerving nature as their title. When the Flask of Origination was instilled again in the modern digital age, they stylized this title as SP00K_E as they spread their knowledge of alchemical on the internet! In between frivolous pursuits and bouts of japery of course.