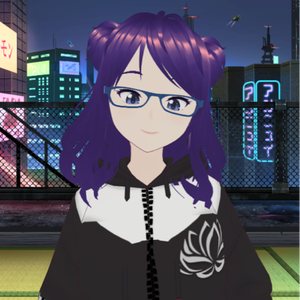 Sophia is a teacher Vtuber. She teaches at a university by day and streams by night. She does a variety of streams including open world games and calm reading streams.

Sophia Ignosi was born to teach. She grew up with a love of literature and writing, and when it was time to choose her career path, she knew what she wanted to do.

However, it has never been easy.

After finally getting her dream position at a prestigious university, she realized her department was full of stuffy old men intent on gatekeeping literature. Increasingly discouraged after fighting semester after semester to wrench the definition of good literature from their hands, she turned to the internet for help. This began her virtual journey.

Vtubers, she discovered, were everywhere. In every language, playing every sort of game, and even beyond! Here, she thought, she could leave a mark and reach beyond her physical students. She could reach students who were kept from her classroom by the stuffy old men who thought literature belonged to the elite.

And so she brought her teaching online... and maybe played some games on the side.