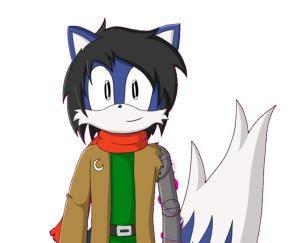 Miles is a male blue mobian fox from the planet Mobius. While talented with piloting skills, his true passion is to make others smile thought various acts of kindness, big and small. Very much seiso, Miles makes it his priority to make sure that anyone who stops by welcome and a part of his family. So if you desire a smile, then you count of Miles, guardian of many smiles.

Miles lived a very humble life, helping others where he can and wanting to bring others happiness. Though with all of the help he had provided and the various smiles he had brought, he still felt alone. This feeling of loneliness would soon be escalated when he overheard a few of his colleagues calling him a loser and their personal servant. Filled with anger and sorrow, Miles grew apart from those around him, still helping and putting on a smile, but never truly finding happiness in his actions as the lingering thoughts of those he was helping were talking behind his back.

One day, while walking through the Wood Zone, Miles was debating whether or not he should just run away from home. He contemplated on the positives and negatives of his options for months, and still had no solid answer. So busy with his thoughts he neglected to watch his step, as he fell directly into one of the evil Dr. Robotnik's roboticizers. Fear filled his body as he tried to escape the mechanical death trap, watching as his left arm was transformed from its soft and fluffy fur to that of ice cold mechanical metal. He screamed in pain from the transformation, closing his eyes as tears rolled down his cheeks, wanting nothing more than to see the faces of his family and friends again. That was when the machine suddenly stopped at his shoulder, and the sound of the metal shell begin to shatter and crash. A piece of the metal shell fell away and outside stood a small two tailed yellow fox. Extending his hand to Miles, he pulled the now partial roboticized fox out and brushed him off.

The two tailed fox could tell that Miles was still filled with fear and patted his shoulder. He smiled at Miles before saying, "That was scary... but it is over now! Sure, you didn't come out unscathed, but that goes to show that you have learned from this experience. Should you stay inside and never come out? No, I don't think so. If I were you, I'd use this new knowledge to do everything I could to prevent anyone else from facing the same kind of troubles I did. I've got plenty of friends who have done that for me, and now I can help others the same way they helped me." The two tailed fox smiled at Miles, said their goodbyes, and left.

Filled with courage and the wisdom from the two tailed fox, Miles returned home and began to talk to those closest to him about the incident and how it came to be. With a new understanding, Miles went on helping his friends and family with a new view on his smile. So long as he is doing what he deems is right, then he can be sure that he is protecting not only the smiles of others, but his own smile.

Many years have passed. Now Miles has decided to travel around not only Mobius, but the entire galaxy and universe in his Class 2 starfighter, the Alura. During his travels he gained the title of "the Guardian of Many Smiles" for his desire to do anything and everything to make someone smile, even if it was for a moment.