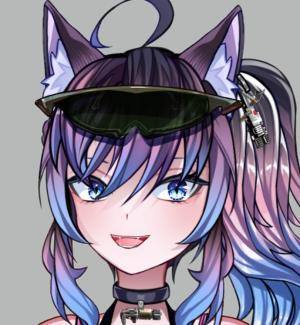 Sofi is a VTuber who creates content in English. She is an independent streamer who may be seen with other streamers. Her birthday is December 10. Her height is 169cm (5'5"). Her zodiac sign is Sagittarius.

Sofi is a demon slaying god who fights to protect innocent lives. Sofi was artificially modified through the second iteration of the Divinity Machine, transcending their former human form. The machine was re-constructed using Jekkad and Maykr technology to create a protector unbound by limitations. Sofi may sometimes be known as the Obsidian Slayer.

Sofi was abandoned at the age of 20, one of many who struggled through the hellish invasion on Earth during 2056. Sofi was found by a nearby Sentinel patrol in a near death state after a bloody encounter with a Mancubus.

Sofi can be found moving between universes to fight evil using slipgate technology. In her down time, she is often found in her Tengian quarters streaming video games, tinkering with technology or watching her favourite popculture shows.

History about the Universe After the Original DOOM Slayer's events, the remaining populous of Argenta, Earth and Sentinel merged together to become the nation of Tei Tenga.

Tei Tenga adopted many old teachings, technology and resources to strengthen their defenses and rebuild what was lost during the events of the original Hell Invasion against Argent D'nur.

Those fit for selection formed a smaller group of elite warriors known as Praetors. Trained to be relentless in combat, utilizing many combat styles, attuning their senses to any environment and adapt to any condition to become the fiercest warriors to walk across the galaxy to fight and quell any evil - The rest remained in administration and overseer positions

Praetors adopt many of the original DOOM Slayer's abilities but eliminating the link to any creator or godlike figure.