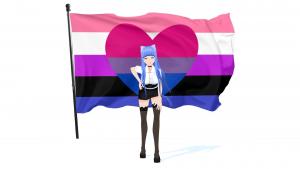 Skye is a Genderfluid Variety streamer from Canada, primarily playing RPG, Simulation, Strategy and City builder games, as well as anything else that catches their attention. They are a mature streamer, who will regularly make lewd comments, discuss controversial topics (though not politics), and even flirt with regular chatters.

Being both Genderfluid and Bisexual, Skye is naturally a supporter of LGBTQ+ causes, and will not tolerate hatred and bigotry of any kind in their chat, regardless of perpetrator or target.

While primarily using a 3D model, current issues with their PC can sometimes require them to switch to a reactive PNG if playing a game with high GPU utilization.

Skye hails from an alternate reality. One where humanity managed to avoid the technological stagnation of the Dark Ages. As a result, despite time between their world and ours running at the same rate, their home Earth is almost 1000 years more technologically advanced than us.

One result of this is their ability to transfer not just the memories but the entire essence of a person, everything that makes them them (the soul, if you want to get religious about it), from the persons original biological body into an extremely advanced, highly customizable Synthetic body known, in their base gender-less state, as a Synthoid.

This ability was primarily invented and developed as way to save those suffering life-threatening injury or illness, but was soon adapted for other purposes. After being made available commercially, it became a popular purchase for Transgender people who were unable to have Gender-affirming surgeries due to medical reasons, but really hit it big with Genderfluid people. The ability to literally reconfigure your body on-the-fly to match your current gender identity was a godsend for them.

Skye was one of these consumers, purchasing the body and transfer service in order to express whatever gender they currently felt like. Some years after the transfer (never mind how many), Skye was caught up in an accident at a High Energy Physics research lab that spilled over into the surrounding countryside. The result of which left them stranded in our reality with no way to get home.