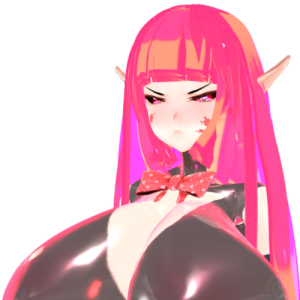 She's very new and she doesn't really understand much about twitch vtuber traditions and such, so chat teaches her more every stream.

Her native language is Japanese, but she streams in English to help her learn it more. Therefore she has a lot of brain buffering moments trying to "remember the English".

Shubi-chan's manager and model creator, shuvidesuka, constantly tries to take shubi-chan's model to the next level, thinking way outside the box of what's already done and what's currently even possible in the world of 3D vtubing. Therefore, as shuvidesuka has stated, "shubi-chan has thousands of previous model versions, and thousands more to come. Shubi-chan's model will likely constantly evolve throughout her streaming career."

Shubi-chan is one third vampire, one third elf, and one third demon hybrid. That's all the lore we know of so far.