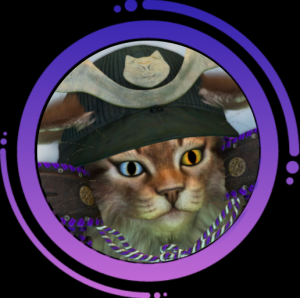 Shinobi Neon is a VTuber/VStreamer who streams in English. He is well known for his smooth voice, as well as his puns and humor.

He often streams Guild Wars, the Monster Hunter series, horror games, and a variety of retro and indie games. He is normally calm, strategic, and a bit reckless, but can become startled and scared in hilarious fashion when playing horror games. Other things that scare him include dogs, and math. His favorite foods are canned cat food, and pizza, earning him the nickname "Samurai Pizza Cat". His birthday is May 14, and he is 10 inches tall.

Shinobi is a unique American Brown Tabby cat who wears a samurai helmet and also has heterochromia - one of his eyes is blue while the other is orange. He claims to have learned "human speak" by being around humans all his life and attempting to communicate with them, eventually learning English. He claims all cats understand English, but most find it too bothersome to speak it, preferring to meow instead. His viewers often attempt to greet him in his native language with "meow", often followed by Shinobi translating their greeting as something humorous and nonsensical, before thanking them for their sentiment.

Shinobi is well known for his wit and humor, as well as his uncanny ability to make puns about pretty much everything, much to the amusement of viewers. In fact, legend has it that there is no subject he cannot pun about. Shinobi is said to possess a legendary “pun blade”, which he claims is “forged from the finest puns and tempered in dad jokes.” He explains that this blade does not hurt his opponents, but rather drains their will to fight by making them laugh uncontrollably.

In fact, his name itself is a pun - the 'Neon' symbolizes his love for retro aesthetics, while also sounding like 'nyan', a Japanese onomatopoeia for "meow". The 'Shinobi' part of his name is not a pun, and comes from his time on the competitive Street Fighter tournament circuit, where he frequently played the female ninja character Ibuki.

Shinobi fancies himself a true 'samurai cat', facing challenges fearlessly (sometimes), while encouraging others to do the same by lending them some of his "samurai spirit" and "lucky cat blessings".

On April 1st, 2022, Shinobi suddenly went missing. A post from his Twitter account asked if anyone had seen Shinobi, signed by someone named "Lynn". His stream that day opened with a "missing cat" poster on his starting screen, showing Shinobi's picture. The stream then began with a colorful feminine layout instead of the usual neon city lights. It was hosted by a young girl introducing herself as "Lynn O. Bea Rionn", a girl from Shinobi's neighborhood who sometimes fed him cat treats. She admitted she was new to streaming, but seemed to get along well with the audience.

Late at night on April 2nd, Shinobi reappeared, apologizing for being unable to stream the day before. Viewers greeted him warmly and expressed their love for Lynn, much to Shinobi's confusion.