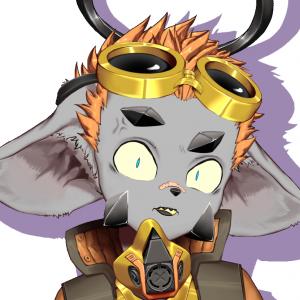 Scoria is a Virtual YouTuber who streams in English. Although he loudly and repeatedly claims to be a dragon, he doesn't appear to look like one at all, rather resembling an amalgamation of many different animals.

He is personable but intensely erratic, often reacting to stressful or scary situations with ear-splitting screeching, as well as performing on-stream stunts such as waxing his body hair and even electrocuting his testicles. He is also self-important and boastful to the point of utter delusion, claiming (sarcastically) on various occasions to be a member of Hololive, Nijisanji, Tsunderia, and VShojo all at the same time, and additionally claiming to have conquered all of mainland China, seemingly in retaliation for certain Chinese fans' mistreatment of Kiryu Coco.

His favorite game to play is Path of Exile.

A vaguely humanoid creature who first appeared around 79 A.D., in conjunction with the calamitous eruption of Mount Vesuvius. Although almost nothing is directly known about his origins, there have been many literary and artistic depictions of him through the ages, all of which either seem to be negative or rooted in extreme confusion. In the present, Scoria claims to be a contractor with the government, tasked with preventing Vesuvius from erupting once more and coating the world in ash, although he seems to spend practically all his time playing video games...