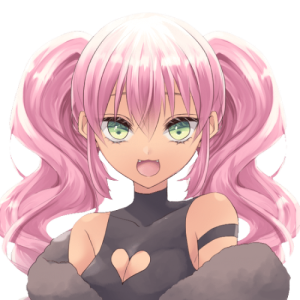 Scarhuntz aka Scar is a pink-haired panther who is lewd or lost most of the time.

In-universe 69 was a Scarlet Hunter, a tiny tiny bebe with panther ears and a feline-like tail like her father. Her ears are black but her hair was awfully pink like no one in my family tree. The green eyes she got from her mother sparkled with magic as she giggled. Being half-witch and a panther descended Scar practiced witchcraft and due to her creature side, she was a bit of a prankster.

At the age of 21, she pranked the wrong witch in the forbidden woods. The witch cursed her and transformed her into an elf. Before Scar could say anything the witch teleported her away to a different universe and another earth. A struggling elf lost most of the magic she had along with her green eyes and her panther side. While Scar goes around the place she finds a place to stay while practicing small spells.

While she practices and stay on this earth she learns about what a pc and gaming are and falls in love with the place. when she turned 22 she found out what content creators is and discovered she could become one of them, the elf turned panther tries it out and find happiness and motivation to push herself to turn herself back.