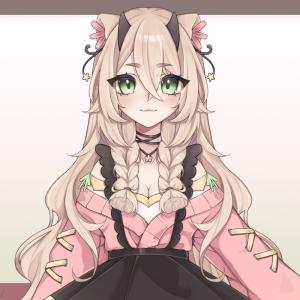 Saura is an independent, English-speaking, Polish VArtist specializing in graphic and motion design.

Saura is a human-dinosaur hybrid created as a result of experiments by aliens. During the impact of an asteroid ending the life of the dinosaurs, Saura was fatally injured. She woke up in a glass vessel filled with formalin in her new, semi-human form. The girl was unable to recall anything from her past life, and since then she has had serious memory problems.

Her body is physically frozen at the age of 23. Her tail, horns and ears are the only remain from the dinosaur form. After waking up, she spent years on her creators' spacecraft, where they taught and adapted her to the new life. Saura lived among modern technologies, unknown even today. If she had a better memory and a better understanding of science, she could be of great benefit to mankind today. She was helped back to Earth by a friend, whose name she cannot remember, as a result of a risky interdimensional jump.