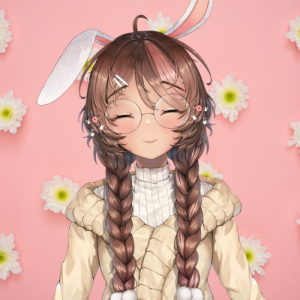 SasuBunn is an English Bunny Vtuber. She has half lopped ears and a pink streak in her hair.

Her streams are best known for Valorant. Besides Valorant she also does Variety stream playing games like World of Warcraft, Teamfight Tactics, and Story Games.

Growing up, Sasu was always thought of as a quiet, kind, studious student. That was only because she was horribly shy, too lazy to care to be rude, and naturally gifted at school subjects. After high school she moved away from her family and reservation to start university. While being gone for school she began her full degen life style. She began playing video games all night, procrastinating all her assignments, and eating snacks instead of food.

One day after a particularly hard week at university Sasu was walking past a pet store when she saw how lazy and nice the bunnies had it, when she went home to take her usual nap she fell asleep wishing she was a rabbit. When she woke up it seemed her wish came true, well at least half true. Sasu woke up with bunny ears and a bunny tail. Due to her new condition Sasu began taking online classes and living life like a true NEET. The only time she would leave would be to work at a maid cafe, one of the few places that were eager to hire her after her new found ears. While the cafe was fun, it was too much hard work, so Sasu began looking into other avenues to make money, and that's when she found streaming. Sasu began streaming with the dream to become full time and be allowed to be a full NEET.