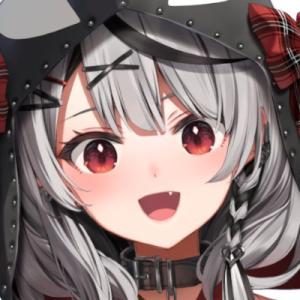 Sakamata Chloe (沙花叉クロヱ) is a female Japanese Virtual YouTuber associated with hololive, debuting as part of its sixth generation under the name of "Secret Society holoX" alongside La+ Darknesss, Takane Lui, Hakui Koyori and Kazama Iroha. Contrary to what her pre-debut artwork might suggested as a "cool and mature" person similar to Mori Calliope and Ouro Kronii, Chloe has a sweet and kind, but somewhat taunt-loving personality, akin to Shirogane Noel, Momosuzu Nene and Tsunomaki Watame. During her debut stream she revealed that she sleeps a lot, often sleeping 12 hours per day. She is also prone to making mistakes and accidents on-stream. Among her most defining characteristics is that she is perhaps too honest for her own good and cheerfully volunteers unflattering details about her life and personal habits, including (but not limited to) body odor resulting from infrequent bathing, various fetishes including bondage and spanking, and having piles of garbage in her room that sometimes smell like McDonald's.

She has a childish and very soft talking voice that can be described as a mix of those of NIJISANJI members Hoshikawa Sara and Matsukai Mao, but can also produce a mature voice when singing, much like Shirakami Fubuki with her "Kurokami" voice. Sakamata Chloe's YouTube channel was created on 12 September 2021. Her Twitter account was also created in September 2021. She was first revealed as part of holoX, the sixth generation of the Japanese branch of hololive, in an introductory video posted on 26 November 2021 at noon JST. She made her first tweet over five hours later, apologising for oversleeping and asking not to be scolded.

An intern who acts as a fixer and cleaner for Secret Society holoX.

Calm and composed at all times, she carries out her orders without so much as batting an eyelid.

She loves music and can be found listening to it every chance she gets. And while she denies it vehemently, she apparently tends to come across as guarded and not very upfront with her thoughts, only letting people get very occasional glimpses into how she really feels.