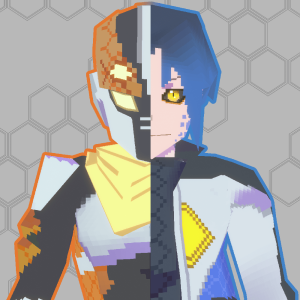 Ryder is a male low-poly tokusatsu skink VTuber who streams in English. His favorite foods are oatmeal and noodles. He loves games that let him punch and kick enemies as if he was in a show like Kamen Rider or Super Sentai. His height is 5'8" (172 cm) and his birthday is July 8.

His last name is commonly mispronounced and misspelled as "Tequila" much to his dismay.

Originally a young, tokusatsu-loving mechanic that worked in a secret facility, Ryder was thrown into a genetic fusion chamber full of skinks by a masked villain. When he awoke, the facility was in ruins, he had a tail and scales, and he couldn't remember anything that had happened. As he walked towards the exit, a monitor displayed the word Ryder, another one displayed the word Tiliqua. Not having much else to work with, the skink found himself some clothes and a bike before making his way to the city. After about a few months of "normal" life playing games and working as a mechanic, Ryder was visited by three robotic skinks who helped defend both himself and the people around him by letting him transform into Scaled Hero Rugosaver. The robotic skinks were created by the only other survivor of the facility, the head researcher who uploaded his mind into a computer. With the help of his four new allies, Ryder started a new journey of mystery and justice. Though, when there are no leads or trouble to fight, he likes to stream games as a hobby.