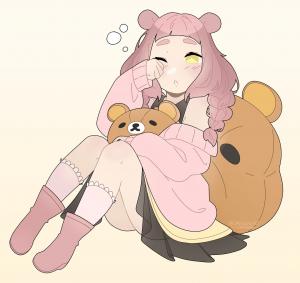 Riza Uramie is sleepy bear English/French VStreamer focusing on comfy, casual streams. She mostly plays casual games like Stardew Valley and Minecraft and is learning to play FPS games like Overwatch and Apex Legends. She also reacts to videos during her just chatting streams. She is known for her chaotic energy, as well as for falling asleep on her live streams.

Riza is a bear cub whose mother died to hunters. From an early age, she learned how to scavenge for food in the garbage bins of the local village. After another attack from local hunters, Riza finds herself injured and she escapes the forest by hiding in a garbage bin of a house on the border of the village.

The owner of this house discovers Riza sleeping in the garbage bin and decides to nurse her back to health, treating her as if she were her own child, something Riza had longed for since the death of her mother. After a month, Riza's wounds had healed and she could walk and run as she once did. The old woman decides to bring Riza back to the outskirts of the forest and soon leaves Riza by herself as she returns back home.

Riza tried her best to live in the harsh winter but found herself unable to hibernate. Cold, famished and on the brink of death, Riza closes her eyes once more and thinks of the old woman who showed her love and compassion, and how she wished she could live with her forever. The next morning, Riza found herself in an unfamiliar position as she now inhabited a human girl's body. She returned to the old woman, who took her in just as warmly as she did before and treated her as if she was her daughter. She was gifted the name of Riza Uramie.