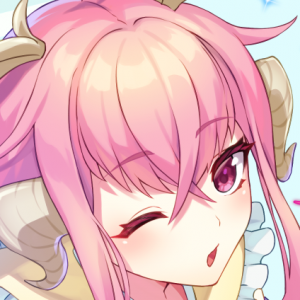 Rira is a female Virtual Streamer and YouTuber who makes content in English. She is a dragon with healing powers that loves baths and has her own onsen. Rira streams video games and sometimes art. Rira also gets easily excited about things and can do an ikemen voice.

Although mostly sfw, she admits to playing eroge.

In the mountains of a mystical land lies a village. The villagers all have draconic features and have the ability to turn to dragon form with their special stone. A young girl from that village badly wants to go out on an adventure despite family's plead for her to stay and become a local doctor. Bored and sick of being holed up in the hut to study, she grabbed her stone and snuck out of the village.

As the girl travelled through the forest in attempt to get to the main town, she became lost and is stuck in the forest. Saddened by being unable to escape, she transformed into her dragon form and fell deep asleep in a pit she discovered.

A few thousand years have passed and the dragon girl woke up from sudden bursts of hot water. The pit turned into a hot spring and the girl reverted back to human form. An injured human stumbled by and in a panic, the girl used her dragon breath on the human. She was horrified at first since she never saw humans before, but to her surprise the human's injuries are all gone. The human thanked the girl and used their magic to create a portal as a way to escape the forest.

The girl walked through the portal only to encounter a different world. Fascinated by humans, she decided to become a streamer and will stream in the forest she's stuck in from time to time.