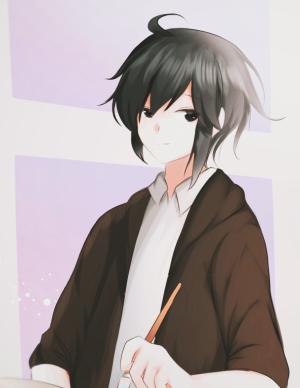 Rioka is a virtual youtuber who first debuted on August 19, 2020, Rioka focuses on casual game content, music games, music covers, mixing, and other learning content. Rioka likes to sing and his main genres when singing are Metalcore and Hardcore, sometimes he also sings songs that are a bit softer. On October 26, 2021, Rioka announced that he would stop being a virtual YouTuber and focus on becoming a virtual singer.

Rioka is from Indonesia, he uses Indonesian as his main language, he can use English even though his ability is still very low, he can also use the traditional language, namely Banjarese.

Rioka has a voice that sounds a little like a child, but she prefers to use her deep voice, when he sings usually Rioka will use a child's voice and scream.

Besides being a virtual singer, now Rioka is also learning how to do video editing, motion designer and audio engineering. He also occasionally commissions vocal mixing, music videos and stream overlays.