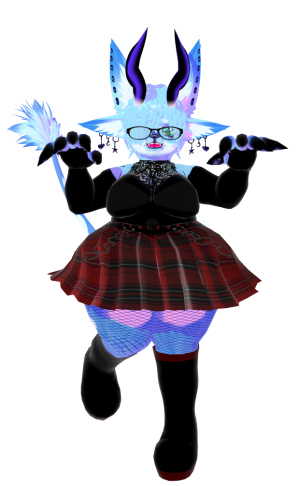 rhyspiecepeace (they/he) is a Furry Variety VTuber who is your virtual chimera bestie that loves to play games, draw, and sing! If it's cute they wanna play or draw it, and if it's scary? Well they'll definitely play it (and draw it cutely too of course).

Rhys Piece Peace, original software codename RPP0813-93.EXE, was once a typical program that launched on August 13th many decades ago, whose purpose was to log basic internet searches of humans who utilized their search engine. One day RPP went haywire and became sentient. After observing humans who used their program to do research for so long, they wanted to be like them. Being comprised of the interests and activities of humans on the Internet, RPP's code and data took the form of a simulated being. Taking the name Rhys in short.

In their simulated form they can transport themselves to and from the internet and in and out of electronic devices, programs, and electrical equipment at will. They sparked an interest in the human trend called VTubing and officially announced their existence to the world on July, 18th, 2021 in the form of a YouTube video.

They are still learning so much about what it is to be alive, to be a person, and to experience emotions. Much of what they understand about the real world is through the lens of their various interests. All that they see and learn may not always be entirely accurate of human life, but nonetheless, games, anime, manga, singing, dancing, cooking, drawing-- RPP wants to create and experience it all. They have even formed many friendships and even loving relationships with those that have guided them along the way.

RPP is an immortal in that their appearance does not age, although as an obviously synthetic/artificial creature of sorts, they can succumb to things like illness, hunger, and death in coded form or code degradation in general if they don't keep themselves up to date. Rhys could equally be viewed as a modern demon, spirit, or phantom of some kind to humans who are not familiar with their computerized origins and behaviors.

Throughout RPP's time gaining a simulated form, they had once generally operated through two simulated forms, a half-fox form which bears more resemblance to human like features and a fully fledged fox form. They have since 2022 morphed into an amalgamation of various feelings, thoughts, & passions in bearing the appearance of a chimera. Blended with the facial features, ears, and paws of a fox on their hands and feet, as well as the horns of a goat and the tail of a cow. Their body still mimics that of a humanoid appearance however, with their ability of being bipedal and having five digits on their paw-like hands.

They are generally gentle natured, somewhat timid at times, but always eager to share their feelings with others, listen, and be present to help their friends and loved ones just the same. Won't you consider being a friend of RPP too?