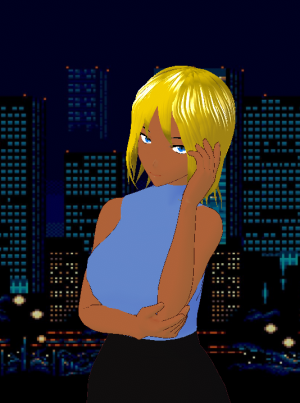 Rena is a Virtual Streamer that makes content for English viewers. She plays a wide variety of games, as well as collabs with friends and family. Previous content of her days before debuting as a VStreamer can be found on her Twitch channel.

DynaKnight, aka Rena Tsukino, is the mother of Akari Tsukino. Rena Tsukino is the CEO of DynaKnight Industries, which manufactures top of the line electronics, as well as robotics equipment. Not to mention, the 3D printer used by her daughter is one of her products. Aside from being the head of DynaKnight Industries, Rena also takes time in video games, like her daughter. Whether it's fighting off numerous opposition in Yakuza 0, she's also putting her survival skills to the test in titles like Ark: Survival Evolved, or constructing numerous structures in Minecraft with friends and family. In terms of species, her daughter is a hybrid of her own Wolf genes and her father's Bunny genes. For the record, the whereabouts of the father are currently unknown, even though Rena herself would not like to recall such from personal experience. On the right side of her head, Rena keeps a personal device that can perform a number of functions, ranging from hiding her Wolf-like ears and tail if necessary, to performing a number of tasks that are needed of her.