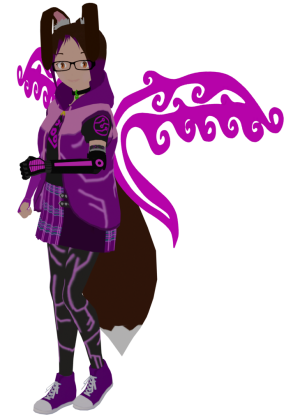 Akari is a Virtual YouTuber who makes content in English. She plays a variety of games and collabs with her friends. She has a few old videos from before her VTuber debut on her YouTube channel.

Akari is Gender Fluid between Fem and Enby-Femboy, with She/They preferred pronouns. They share a body with a Tulpa nammed Gato who occasionally joins in speaking during streams.

Akari's screen name is Akari_Enderwolf, however her name is actually Akari Tsukino.

She's the Ender Princess, as such she is an Eldritch Entity. She possesses a fleet of starships with various capabilities, including ships with a weapon called the Variable Mass Railgun, capable of destroying other ships with a projectile the size of a pencil. These ships run on a power source called an Ender Core which is formed from her Eldritch energy.

Akari's left arm is cybernetically augmented and has a variety of functions including 2 standard functions, a flashlight and being able to directly link in to her cyberspace, and a number of other specialized functions dependent on how the attached arm was printed. New arms can be designed within her cyberspace and then 3d printed to attach to a socket augment on her upper arm.

Akari also possesses cybernetic augmentation around her spine, which provides her with energy wings that she can activate and deactivate with a thought. These wings flap like normal wings when in atmosphere and utilize advanced thrust technology to be able to produce similar movement in a vacuum.

Species wise, she is a Bunnine girl, being half-bunny, and half-wolf due to her parents. Her tail is rather floofy and soft.

She wears glasses to help her eyes with UV light sources, as they give her migraines, her ships having special lights for internal sections to provide Sun-like light, she tends to wear them whenever she can. She also has Nyctophobia, a extreme/panic inducing fear of the dark.

When entering Cyberspace or switching to a Backup Body her Mind/soul are digitized and recompiled into an AI state, then decompiled when returning to her body. When in her AI state it leaves her body as being akin to being in a coma.

Her Backup Bodies are capable of being commanded akin to a RTS game from Akari's perspective when she chooses to control groups of bodies. When controlling only a single Backup Body she fully experiences things from that body's perspective.

If in danger, her organic body can disperse and she will awaken within one of her Backup Bodies, after a while her organic body will re-form in a state matching the state it was in when the Ender Core of that specific Backup Body was created.

Akari is capable of shapeshifting, including changing size, teleportation, and a number of other Eldritch abilities.