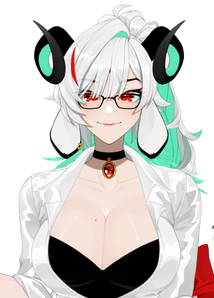 Raukisu (라우키스, stylized 'raukisu') is a South Korean illustrator that streams primarily on YouTube. Although they have previously used Twitch as their main platform, they decided to make the switch after Twitch's policies for South Korean streamers had changed. They also use Discord, Twitter, Instagram, and Reddit to share their illustrations and Live2D work.

They identify as nonbinary and use they/them and he/him pronouns, though they have not gone out of their way to correct any uses of feminine pronouns.

They primarily stream illustrations and Live2D models, but very rarely stream games that catch their attention. They enjoy rhythm games, platformers and social deduction games, but are open to branching out to other non-competitive games. While they do speak English, Korean, Mandarin, and Filipino, they default to English for their streams.

They often have a very calm and patient demeanor when it comes to streams, but they are also prone to sudden unpredictable bouts of high energy. They claim to have "the patience of a saint," saying that no game has ever made them quit out of anger. No evidence of this has been shown as of yet.

They are currently on a streaming hiatus after moving to a new apartment as their new router does not have enough bandwidth to maintain a stream. However, they still actively stream and host community events on their Discord server.

Rau is a goat-like demon heavily implied to be either an avatar of Baphomet or Baphomet himself. They claim to have moved to an apartment in Korea because the rent in Hell got too high due to overpopulation. Currently, they have a suspicious amount of connections with other fantastical creatures from other worlds beyond just Hell.