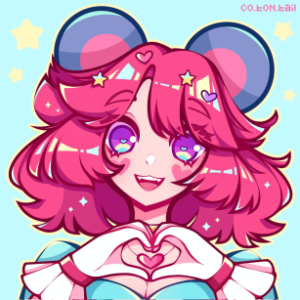 They are known for their cute aesthetics and squeaky demeanor and are described as cursed and easily flustered.

Sylvania Nova -also known as Rat- is a fledgling Messenger of Love, similar to Cupid or Eros described in human mythology, who serves the Goddess of Love. They were sent to Earth to spread love and joy to those who need it most, but being a less experienced Messenger causes some misunderstandings of how to show love.

Normally, Messengers of their age aren't sent on missions this early on, but their curiosity and fascination with humans got the better of them and they insisted on going. They had watched humans from afar, studying their behaviors as well as what they liked and took on a form according to their research. Unfortunately, when they arrived on Earth, they quickly realized they had skimmed over a small detail when reading about popular aesthetics among humans and misread catgirls as RATgirls. Despite this, they continued their journey to find those in need of love in their lives.

They accumulated an assortment of odd looks as they walked through the street in their overly cutesy and bright outfit. Feeling lost and self-conscious, they ran into a tired-looking human with dark, half-dyed hair and glasses who looked exactly like someone in need of her help named Min. Syl explained that they were a Messenger of Love sent on a mission and had no home. The human looked Sylvania up and down but seemed unfazed and continued walking. Sylvania had decided to help them and followed them back to their apartment.

The two became roommates, and Sylvania learned of popular human activities by surfing the internet on Min's computer. Eventually, Min introduced them to streamers and content creators to watch so that Syl would leave them alone. They saw the masses of lonely people who desired connections with others that seemed to flock to these sites and decided that this would be the most convenient and efficient way to carry out their mission- by spending time with people and becoming their friends.

Part-time cupid and part-time streamer, ratbabbey works to bring love and light to those who need it most through the power of the internet~