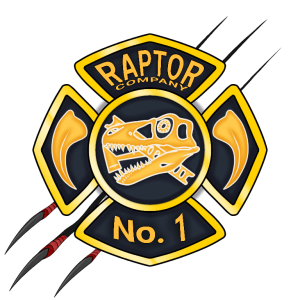 Raputa Shobo-shi is a ~100 million year old Utahraptor Firefighter! A certified "Himbo" and purveyor of good vibes, he hopes to brighten the days of anyone he can!

Being the only known surviving Utahraptor, Raputa started fighting fires in an attempt to avoid another world-ending fire like the one caused by the big rock that took out the rest of his kind. Since then he's managed to (somehow) blunder his way through surviving every single subsequent disaster that has faced the earth. He often talks about his past experiences, but the stories tend to be inconsistent or far fetched. He might be going senile.