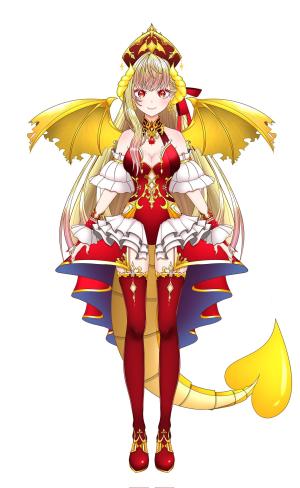 Quinn is an Royal Dragon Vtuber who streams games and just chatting and likes to pull puns. She usually plays story games,pokemon games, horror,adventure games. She also likes to collab with MellyVT and likes to pull puns. She's also done her very first Meme Stream where she reviewed community made memes and She also reached Affiliated on Twitch June 6 2021. She's also finished games like Little Nightmares & Little Nightmares II The Witch's House Man of Medan w/ Melly Inside Untitled Goose Game w/ Melly Catherine Classic It Takes Two w/ LucaLullaby Corpse Party A Way Out w/ MellyVT Detroit: Become Human PokéPark Wii: Pikachu's Adventure House of Ashes w/ Melly Pokemon Brilliant Diamond Elden Ring ( Editors Note: She's an Elden Ring Pro who maxed her character before even getting to first boss and one shot'd all elden ring bosses throughout the playthrough) Uncharted 4: A Thief's End. Too be noted Quinn is also an very Talented Artist and drew her entire model herself. she's also drawn lots of self made fanart of it. also she can speak Japanese,Malay,English she's also a very big sweet tooth who loves to snack on things and she often offers her tail to her community as a snack. she also likes to keep people in her basement for reasons unknown. too be noted: she dislikes clifts and rocks due to she always falls off them in games or runs into rocks in games which has created a inner hatred and she'll blame it on her mods and fans that it's false news.

Quinn is an punny royal dragon princess and a sweet tooth who grew up in the royal kingdom where her servants always made sure she had the most comfortable lifestyle. there's not much known aside from that before she came to the human world she was a fearsome dragon which put countless of human lifes to the end. at the very moment she's more nicer and enjoy to spend her days in the human world stalking the hoomans and learn how they live. she's also known to be quadrillion million billion feet tall and be the strongest dragon ever. She still resides in her royal kingdom in which she holds a huge treasure of gold which she protects from evil and bad people who try to steal it. often resulting in them being slain.