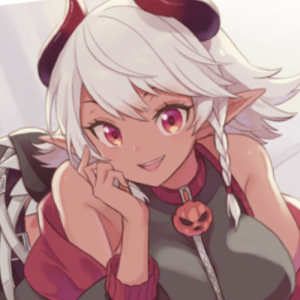 Pumpkin Paichi is an English Speaking streamer typically found on Twitch. She enjoys playing games, drawing, sewing, and singing. However, due to her inability to stay on task and keep focused when anyone talks to her, she typically uses her art streams like just chatting streams, getting very little done. She is very easy to derail and holds completely different conversations every 5 minutes. Pumpkin’s streaming schedule is all over the place without a manager but when she does stream she typically averages 2-hour streams usually on weekdays after 6pm in Pacific Time (UTC -8).

Pumpkin has the moronic but lovable older sister vibe, so typically she is an easy target for taunting from those around her. She typically yells and laughs a lot in response.

She has said that she is bad at responding to direct messages and she is shy about reaching out but once in a voice call with others she becomes extraverted and can talk about anything that comes to mind.

Pumpkin is a part of the Suni Sibling Family (Models by the mama @su_niii on Twitter) and regularly interacts with her fellow members of the family. She typically is mutually antagonistic towards Ezekiel Aethalus, and loving towards her other siblings.

Pumpkin is receptive to different types of collaborations and has been featured in multiple interviews and streams with other indie vtubers as well as skintubers and those that don’t stream as well. She attends conventions such as Offkai an West Coast cons as well.

A demon that (you) summoned and can't get rid of.