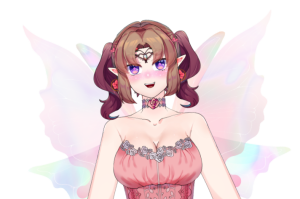 Pixi is a high-energy, extroverted airhead who, despite her title, often makes lewd jokes or sends herself into a giggle fit over a bad pun. A little weird, she's always entertaining and usually cursed. Pixi's a massive vtuber fangirl & degen who can't keep herself from simping for anime women, but she has big dreams of being an idol herself!

A runaway Faerie Princess who abandoned the pressures of the crown to come to the human world, mistakenly basing her knowledge of humanity off of anime. Unfortunately, she used up all her magic teleporting here and is stuck! But she's not letting that stop her from her dream of being an idol!