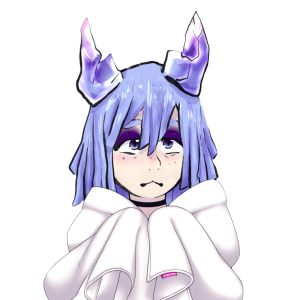 Piku is a crystal dragon who takes care of a crystal cave with a bunch of slimes in it! She is a trans-woman (she/her pronouns) and she is also an artist, doing most of her assets herself such as drawing her model and her background. She streams mostly newer games such as Guilty Gear Strive, Overwatch, Valorant, etc.. and also tends to do art streams at times. Her streams are locked at 18+ since she's not shy when it comes to discussing more mature topics.

-You don't need to understand the lore to enjoy the streams, it is very rarely mentioned-

Piku is a very weak dragon, unable to do tasks such as heavy lifting and long distance flying. So much so that she is unable to get a job in modern dragon society due to the heavy reliance on flying as a method of transport and the lack of faith in technology making remote jobs unavailable. One day she encounters a crusty old cave with a bunch of destroyed crystals, and some slimes feeding off the little remaining energy. Since part of her family works valuing crystals, she knew how to fix them, and did so for the slimes. They were very happy and caring, and she immediately took a liking to it. Since then she's been passing by and taking care of the cave every now and then, but in a fleeing conversation she mentioned it to someone who said they worked in cave preservation. They got in contact and she now works full time to preserve the cave! Very excitedly, she decided to move into the cave so she wouldn't have to commute and pay rent! The pay was subpar but it was enough to save up for a decent computer to play games on as the time went by. There's not much excitement to have in the cave however, so now she streams on twitch!