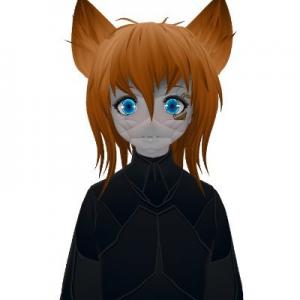 Okami is an LGBTQIA+ who predominantly streams in English but also speaks Dutch on occasion. She mainly plays games like Dragon Quest, Overwatch, Magic or Civilisation depending on her mood. She is not afraid to play with trolls and makes weird noises when she gets scared or dies.

Okami was raised in the country side with their folks but that was not always Okami's desire. Something drove Okami more, knowledge, Science, Helping others to feel that they can push past their potential. So Okami left home and went to the Big City Silvermoon, this city was known for making many people great. From Noble Prize winners, to Adventures who discovered new worlds, Hero's even. Okami was going to make her mark here. After 10 years and working her way thru the system, she was able to discover Robotics in a corporation known around the world and she was one of the leading scientist. She was actually about to lead into the new discovery of Cybernetic organism and evolution into not just humans, but for anyone Elf's, Ogre's, Wolfs. This was going to be Okami's Chance to fulfill her dream and change others lives to their desires. Yet someone else wanted this credit, they wanted to have the glory and knew the only way to do this was to have Okami Sora out of the picture. She was known as Degly Cromuson, and she was always consider smart as a Dark Elf and her life was harsh, which is why she always seem cold towards others. But she disliked Okami for being recognized before her talent. So Degly came with the solution to make it where she can be incharge of this project and get rid of Okami, she would set a trap and it would lead to Okami's Demise and no one would ever connect the pieces, except Degly didn't know everything about Okami and what she could do. Following a few weeks into the project Degly had left a package inside Okami's lab when she knew in secret that Okami had to go back that night as she left behind her phone. So as Okami went in the opened the door that was string toward a bomb with chemicals that wouldn't be traceable back to Degly that was going off in less then 10 secs. The explosion was so massive it blew the entire lab apart, as glass and fire flew the building was almost completely caught on fire if it wasn't for night security and the quick actions of on site medical team the fire would of done more damage. Okami was rushed into the hospital wing on site but the lab was completely gone. Okami was resting and being tended by the staff, but this only angered Degly even more the Dark Elf wanted to dispatch Okami for good. So to keep her hands clean for the corporation and to easily keep the lead during Okami's recovery she set plans with her Brother Kamris Cromuson who knew people that could hurt someone when needed or cause trouble. The night was clear and Okami was healing quicker then most anticipated. Yet from Kamris and his connections they got a Assassin named Jyisa a naga from the far east. She slithered her way into the building undetected and reached Okami's room, and pulled from her satchel a vile of the most toxic poison in the world, with a slight hiss like laughter she was going to pour a few drops into okami's mouth only to see that Okami whole face was covered in bandages from the explosion so she reached for her knife for plan B as her window gap was closing and as she Drove her knife into the bed Okami rolled off and was facing her. Jyisa was taken back but she wasn't going to let this stop her, she lunged at Okami's chest. Okami reflexes felt out of human and she unconsciously grabbed her arm snapped the bones inside it which made Jyisa dropped the knife and with a hard kick the the side of the head was smashed against the window leading 2 stories down.