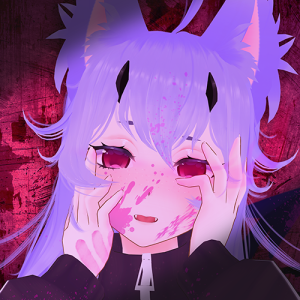 Nyhzumi is a Brazilian demon wolf VTuber who makes content in both Portuguese and English. She has a somewhat morbid humor and sucks at any games she plays!

Nyhzumi is a part demon wolf girl. She loves to howl and run around naked like a wild animal. Usually hyperactive and causing trouble, but can be a bit naïve and shy towards the human world. One day she was found in the forest by a human, and followed his scent home. Refusing to leave after being fed once, she eventually became his pet dog. Nyhzumi still has trouble understanding human customs and traditions, but enjoys playing video games. Now her Owner forces her to stream, so she can pay for what she breaks and chews up. Prepare for lots of AWOOOOOS!! 💜