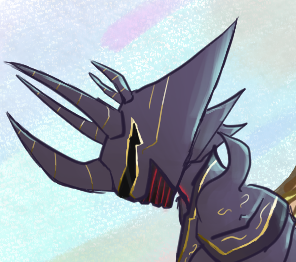 Noctis is an English transmasc streamer with a large focus on single player game content.

Noctis was once a member of an order of knights whose sworn duty it was to protect young and upcoming species that were being synthesized by his own kind-- essentially a sci-fi angel for another species of intelligent bugs.

However... He lost control of his emotions, corrupted by his internal darkness into an imperfect being. After a violent outburst in front of his very queen, he was stripped of his status and exiled from his colony.

He streams to cope with the extreme isolation he's been placed under.