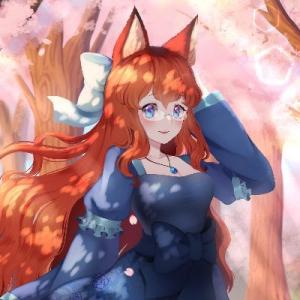 Niryna Hanaki is a Norwegian kitsune gamer who broadcasts on Twitch. She streams a variety of games with an emphasis of doing challenge runs, achievement hunting or playing a game fully from start to finish. Sometimes she's shy but she enjoys to interact and chat with anyone.

Niryna were raised by a shrine in Norway, tending to a spiritual garden and healing the innocent. Unlike most kitsune, due to her father being human and her mother a kitsune, her form is permanent - it's easier to call her a fox girl with spiritual and astral abilities.

Out of curiosity she decided to check out what humans are up to and discovered the internet and media, shortly after becoming a fan of video games. In her spare time, she broadcasts online doing what she loves.