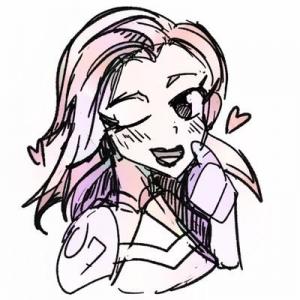 Niki-Kiji (Niki, or Kiji in normal conversation) is a British Variety VTuber and VStreamer, known for being "horni" and posting NSFW content.

over the course of her career as a Vtuber NikiKiji has had a total of two models, with her next one due to debut in late autumn 2021. so-far NikiKiji has created all of her own assets(except BGM provided by @mimimoonbeam of Twitter)

Niki-Kiji is known to stream 2 games each week in two continuous series, Her streams typically begin with a short Duolingo segment wherein she practices learning Japanese as a form of warm-up to the feature presentation(The game). Niki-Kiji's streams have an excitable and chaotic atmosphere, and her interests include fanfiction, web novels, Engineering and "the insanity of the human race".

Niki-Kiji came to Vtubing in late October 2020 with entirely "seiso" or wholesome branding, however over the course of December and January she went through a slow process of converting her branding to SFW but more "adult" content. this conversion culminated in the completion of her "side B" model and her participation in the "positivity interviews- Lewd Vs Seiso" event hosted by CrookedSmile, which occurred on the 1st of March 2021, indicating the completion of her rebranding.

Niki-Kiji has, since beginning her career has collaborated with others many times although has not had regular collaborations with any specifically.

Niki-Kiji is a free android from another, parallel dimension. she was built in 1993 by the Acorn Biomatics Co. of Somerset, England. it is unknown when she developed sentience however she received her distinctive Bodysuit colouration as a side-effect of the experimental gateway she was being used as a test dummy for. Said test is how she arrived in this dimension.

Niki-Kiji has a sequence with-which she transforms between her two sides, side A and side B. This transformation sequence is a part of a form of "puberty" that androids of her line are capable of performing after certain requirements are set. Traditionally this takes the form of specialisation in a particular field application(Military, construction, linguistics.etc). However, in Niki-Kiji's case, it manifested as a further refinement of her sense of self, acting almost like a magical girl transformation.