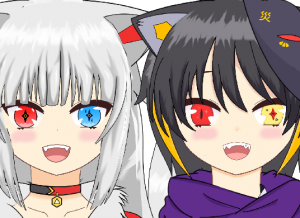 ナツハネコ (natsuhaneko) is a Foreign female Independent vtuber who is based in the Philippines who speaks English, Filipino and some Japanese. She has 2 characters which she switches to and from freely. She does gaming, endurance streams and OC content related to her lore. Natsuha is a vtuber that does anything she wants.

Natsuha is a maneki neko and second seat of God who fell from heaven and was transported to the human world shortly after her fall. For centuries she wandered every corner of the world until finally settling somewhere in the Philippines, where eventually in the modern era became a vtuber to spread happiness and fortune to all despite losing her status as God.

Natsuha has two souls in her body, one is kind, gentle and brings good fortune and the other soul brings upon disaster and chaos to all. Her other soul used to be sealed in a special triangular curse-mark which she used to wear as a shirt, but shortly changed into a numerous bunch of items. As time passed, the seal cracked and weakened, slowly leaking out the miasma of her other soul making her appear as a psychotic goddess from time to time.

However Natsuha, came to accept her other soul which manifested a physical form named Hane. It was later revealed that despite the feminine charms of Hane, he was actually a male character from the beginning. Hane is a kuro maneki neko who specializes in chaos and all things disaster, however also has a side job of warding off evil spirits despite the fact that Hane himself is an evil God/Spirit.

Natsuha is a shiro maneki neko but is often mistaken as a fox due to her world's language who heavily uses the word 'kon'. Her world's language is called Konba which is similar to Japanese but not really. Her height is 169cm and self-proclaimed to be 106 years old although her real age is unknown.

Hane is a kuro maneki neko and the younger twin brother of Natsuha. He insists he is part shark after due to his teeth and apex predator instincts His height is 175cm and his exact age is unkown.

Both characters have birthdays on August 11.